Imperfect Men and a Providential Moment 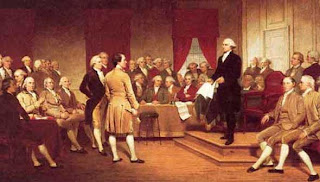 There are times when the Hand of Providence shows itself clearly in history. June of 1787 was one of those times.

After more than four weeks of bickering among the delegates to the Constitutional Convention, nothing had gotten done. Every man in the room had his own ideas about how the new form of government should be structured. There was a struggle between those who wanted more centralized, and less centralized government. There was a struggle between the Northern states, and the Southern states, and a continuous argument over how the federal legislature would be set up.

It was looking like the convention that had failed to even get together a couple of times before would now fail to accomplish anything. The dream for a United States of America may have died right there.

Then an old statesman named Benjamin Franklin made a statement that should be read and studied by every student in American classrooms. He was old and feeble. History says that he wrote his words down and had another deliver them.

Here is some of what he said:

"In this situation of this Assembly groping as it were in the dark to find political truth...how has it happened, Sir, that we have not hitherto once thought of humbly applying to the Father of lights to illuminate our understandings?

"In the beginning of the contest with G. Britain, when we were sensible of danger we had daily prayer in this room for the Divine Protection. -- Our prayers, Sir, were heard, and they were graciously answered. All of us who were engaged in the struggle must have observed frequent instances of a Superintending providence in our favor.

"And have we now forgotten that powerful friend? or do we imagine that we no longer need His assistance.

"I have lived, Sir, a long time and the longer I live, the more convincing proofs I see of this truth -- that God governs in the affairs of men. And if a sparrow cannot fall to the ground without his notice, is it probable that an empire can rise without his aid?

"I therefore beg leave to move -- that henceforth prayers imploring the assistance of Heaven, and its blessings on our deliberations, be held in this Assembly every morning before we proceed to business."

The men of the founding era were not superhuman; they were men. They all had their own faults and struggles in life, just like we do. Not all of them got along, and you would be hard pressed to find two whose political views were exactly the same. But they were the right people at the right time whom God was able to use mightily to bring about His plan.

And no, I'm not forgetting the women. I consider Abigail Adams to be a founding "father."

Soon after Franklin's speech, the convention broke through with the Great Compromise. There were a few snags hit after that, but the corner had been turned. There would be a Constitution.

When the document was finally finished, Ben Franklin dovetailed the event with another speech:

"I doubt too whether any other Convention we can obtain, may be able to make a better Constitution. For when you assemble a number of men to have the advantage of their joint wisdom, you inevitably assemble with those men, all their prejudices, their passions, their errors of opinion, their local interests, and their selfish views.

"From such an assembly can a perfect production be expected? It therefore astonishes me, Sir, to find this system approaching so near to perfection as it does.

"And I think it will astonish our enemies, who are waiting with confidence to hear that our councils are confounded like those of the Builders of Babel; and that our States are on the point of separation, only to meet hereafter for the purpose of cutting one another's throats."

The summer of 1787 was a Providential moment in history. I don't know about you, but I feel another one of those moments coming on.

Turning points in history never pop up out of nowhere; they are the final bloomings of seeds that were planted sometimes hundreds of years ago.

The Civil War didn't begin in 1861; it began when a ship wandered off its course, found itself in Jamestown, and traded its slaves for supplies to get back to Europe. The men of Jamestown weren't exactly what you might call stand-up citizens.

Eventually they figured out that they could get away with cheating the Africans into working longer than their contracts (because they couldn't read English). And eventually laziness and an air of aristocracy that had been carried over from the Old World with the "gentlemen" of Jamestown merged to create a feudal state in the Old South. The differences between the Old South and New England were sown in the differing founding principles of their two original colonies. The events of the following two hundred years were merely the seed growing to its full bloom.

The battle we face today began at the turn of the century with the ideas of Progressives like Teddy Roosevelt, Woodrow Wilson, and Margaret Sanger. Barack Obama is simply the full bloom of the deadly flower planted almost a century before I was born.

What we face now is a choice between the America our founding fathers envisioned, and an America early 20th century Progressives struggled to create. Slowly but surely they've poisoned every aspect of our society: the public schools churn out brain dead zombies, the liberal universities destroy whatever reasoning power is left, professors from those same universities write the textbooks for the next generation of brainwashed public school kids, and those kids are now grown up and raising unruly terrors of their own. Even the people in the media by and large come from those same universities. The American people can't fight what's happening because they don't know what's happening. They don't see the chains that have slowly been forged around their wrists and ankles.

Americans. We the People.

And We the People have come to believe in a fish-picking, moose-hunting, Mama Grizzly from the wilds of Alaska. We recognize in her the qualities that define us. And when I say "us" I mean, the US.

Just like those men with a wide variety of opinions and backgrounds who sat in a hot, airless room in the summer of 1787, we are altogether imperfect. But now is not a time when our own efforts will save us. The Hand of Providence is moving once again. Will it be the last time? Who knows. But I know this: It's one great time to be alive.