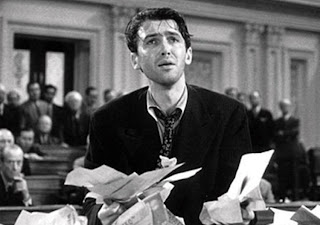 "I suppose when a fellow bucks up against a big organization like that, one man by himself can't get very far."

We little people of the world aren't too comfortable with all this "change" that's going on. We don't know all the details of it, but it just isn't sitting right in the pit of our stomachs. So we go out and protest because we don't like it.

Maybe we're overreacting. Maybe we're wrong. Maybe we just don't understand. Maybe we can't win. Maybe the machine is too powerful. Maybe in the end, it's better to just try and get what you can out of this life and quit fighting off the inevitable.

Why did William Wallace fight? Would life have been so bad under the rule of his enemies? Was it really all that bad in the colonies? I mean, seriously, it was just a few high taxes. It's not like the British were gunning us down in the streets. Well, there was that one time....but they were just trying to keep order. So why all the fuss from those founding fathers? Why do some in Wales today want England out of their business? Why?

Why do barbarians resist? What is it? I don't know. Instinct, I suppose. I guess it's just our nature.

One of the things that struck me the most this last election was how obvious the elitism of the media and many pundits from both parties were in their treatment of Sarah Palin. I mean, what on earth made a hockey mom from Alaska think she had any right to run for Vice President?

The gall of that hick woman!

Less government? She doesn't know what she's talking about. She shoots moose, for Pete's sake. Another example of why the little guy really shouldn't be anywhere near the Oval Office. Those little people just don't know what's good for them. Like Bill Maher says, America is a stupid country. If only we were enlightened enough to see how benevolent and wise Obama's policies truly are.

Progressives and liberals go hoarse trumpeting their support for the little people, but the instant one of those little people dares to think they can enter their little club, their true elitist colors show through.

One of the most remarkable episodes came after the campaign at a media event discussing the coverage of the 2008 election. Some guy in the audience got up and said something to the effect of: "Well, yeah, we in the media were for Obama. But I think an important point is that journalists are among the smartest people on earth, so it was merely a bias of smart people recognizing other smart people...." Those weren't his exact words, but that's the gist.

What irony. I thought to myself, "So, you journalists who think you're so much more enlightened than we little people who could never be trusted to make up our own minds based on objective information so we have to be spoon-fed your opinions think that Sarah Palin was stupid? And your justification for this is that you have journalism degrees?"

Wait a second, what did Sarah Palin get a degree in? Oh, yeah....journalism! So, I guess if someone as "stupid" as Sarah Palin can get a journalism degree, than you snobs are not nearly as brilliant as you think you are.

Why do we like Sarah Palin? First of all, her policies make sense, but I think it's mostly because she looks like us. We are the underestimated of the world, and so is she. We're looked down on and told that we just don't know very much or what's best, and so is she. We rabidly defend her when she is attacked, because it feels like they're attacking us. When they take a stab at her, I feel it. It's like they're stabbing me.

Maybe we don't know everything. Maybe we do go more on instinct than on the degrees hanging on our walls (walls that desperately need a new coat of paint that we can't afford). Maybe here and there we get a fact or two wrong. I don't really care. We're the little guy; it's just our nature to resist.

Call us crazy, but we don't like being told what to do. We don't like some punk from Harvard telling us that we're stupid. You better be careful; I wouldn't poke a stick at the mad dog if I were you. Better to just walk away and leave him alone.

You know what America was supposed to be? Home of those crazy, unenlightened individuals who will probably mess up a few things in their lives, but who feel that they've got a right to make that decision themselves. It's a little thing called freedom. A little, glorious thing that makes tears well up in your eyes for no apparent reason.

Maybe we could set up a system where redistribution of wealth made everybody's life comfortable. Everybody gets free everything. Why do I get the feeling that I wouldn't be happy? Is it because I'm against what they'd be giving away for free? No. I guess I'm just a stupid barbarian.

I like to feel that I've earned it. I guess I would rather live in a shack and eat carrots for the rest of my life and make my own decisions than live in Washington D.C. with steak for dinner every night and have the government tell me what to do. Maybe we are stupid. Maybe we would mess it up, but that's our right. That is our decision.

The elites will never understand. They'll never understand why it is that we're not happy with their handouts. They think, "We've offered them food, a house, clothes, a college education, healthcare, and all for free....they should be happy. Um, why are they grabbing pitchforks?"

Because we're human beings. We're not your dogs. We can make our own way in this world, thank you very much. We don't want the scraps from your table. We are people, no better and no worse than you. And we will not be treated like your horses.

We want to work. We want to earn our way. We want to make our own decisions, and we want to live in a country that will allow us the freedom to do that. Period. We don't want anything else from our government. All we ask for is protection against those who would intrude upon those freedoms. No more, and no less.

Long live the little guy. May he one day be free forever from the snobs of the world.