The High Tide and the Turn I was sitting in church this morning thinking about 9-12. I thought about how that day rested and rejuvenated me and millions of others across this nation. I thought about exactly what it is that we're up against, and that the fight is nowhere near over.

It's easy to get discouraged when the world is against you, especially when it seems like the Good get raked over the coals worse than anyone. I think that God lets us feel the heat first in order to burn the junk out of our lives. It's a purifying; a preparation for what is to come. I can't say how long the trials will last, all I know is that God is good. He will use even the evil of this world for His purpose, and when the time is right He will reveal that purpose.

That being said, I feel the tide turning. Gathering together at tea parties across this nation has reminded us that we're not alone. There are thousands of others who believe in the same founding principles that we do, and this knowledge makes us stronger. It gives us the courage to stand up to those who would enslave us. 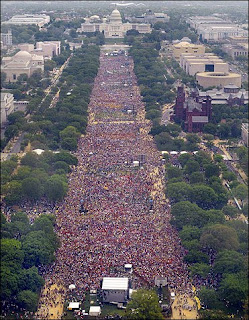 One of my favorite poems (a very long poem) is called The Ballad of the White Horse, by G.K. Chesterton. In the heat of battle, this line rings out: "The high tide," King Alfred cried. "The high tide, and the turn!" The point at which the battle that had been going against them for so long turned in their favor.

9-12 was important, not just to send a message to our leaders, but to encourage each other. I wasn't there in body, but I was there in spirit. I made it to the April 15th tea party in Madison, WI. I can't describe the experience. The feeling that, truly, I was not alone. As I flipped between Glenn Beck and C-SPAN on 9-12, those feelings came surging back. Perhaps it is only the calm before the storm, but I felt uplifted and strengthened. I have to wonder if we're not close to that turn. It's not a turn of power, but of truth. We simply do not believe the lies anymore.

Not everyone at the tea parties agree on everything. When I went to our local tea party on the 4th of July, I was shocked at the number of liberals there. People who I probably don't see eye to eye with on any number of issues, but who believed in making a sensible budget. Who recognized that giving the government too much power is a problem.

While Obama and the extreme left are trying to divide us by race, class, income, and education, the ordinary citizens of the United States of America are finding grounds to unite on. And they're uniting in spite of their political leaders, not because of them.

Wait, maybe that's not entirely accurate. Maybe it is because of them. Because in their power-drunk attempts to divide us and cause us to destroy each other so that they can then come in and make themselves rulers over all of us, they have pushed us to actually meet and talk to each other. In these conversations we have learned that we are not devils, each intent on destroying the other. We have realized that we agree more than we disagree. We have realized that the source of our contention isn't each other, but the ones screaming at the top of their lungs that there is contention. They scream it in order to create it.

The Louis Farrakhans of this world have hijacked our political system. The government of the people, by the people, and for the people has been perverted and twisted into a government of by and for the politicians, the media elite, and the special interests. They turn us against each other to distract us from their crimes. But their days are now numbered, for We the People have woken up. When good stands, evil withers in its light.

Will the going be easy? No. Never. Nothing good is easy. But what's the alternative? We are on the right side of history. We know who are are and what we stand for. We have found common ground with people we normally would have no contact with. We now see clearly who the enemy really is and what they're trying to do. That's all we need.

They have the money, the influence, the power, and the positions; we have the truth. We have our principles, we have our souls, and we have a love for all that is good and open arms for anyone who shares those beliefs, no matter what differences we may have on other issues. Let the waves break upon our bow, let the lightning blind the sky and the thunder roar itself hoarse. No storm can sink the ship wherein the Master of earth and sky is sleeping. Let us not say that God is on our side; let us seek to be on His side, and though we perish, yet shall we live.

"These are the times that try men's souls...tyranny, like hell, is not easily conquered....Heaven knows how to put a proper price upon its goods, and it would be strange indeed if so celestial an article as FREEDOM should not be highly rated....I call not upon a few, but upon all: not on this state or that state, but on every state; up and help us...

"Let it be told to the future world, that in the depth of winter, when nothing but hope and virtue could survive, the city and the country, alarmed at one common danger, came forth to meet and to repulse it. Say not that thousands are gone, turn out your tens of thousands....It matters not where you live, or what rank of life you hold, the evil or the blessing will reach you all. The far and the near, the home counties and the back, the rich and the poor, will suffer or rejoice alike.

"The heart that feels not now, is dead: the blood of his children will curse his cowardice, who shrinks back at a time when a little might have saved the whole, and made them happy. I love the man that can smile in trouble, that can gather strength from distress, and grow brave by reflection. 'Tis the business of little minds to shrink; but he whose heart is firm, and whose conscience approves his conduct, will pursue his principles unto death....

"Let them call me rebel, and welcome, I feel no concern for it....I thank God that I fear not. I see no real cause for fear. I know our situation well, and can see the way out of it."

"As a tide turns on the tall grey seas, See how they waver in the trees, How stray their spears, how knock their knees, How wild their watchfires burn!"