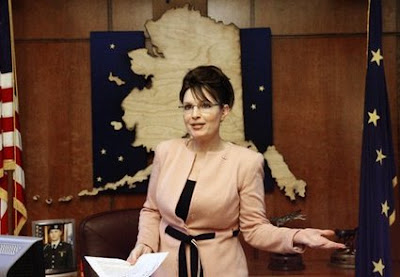 The gall of that woman. Doesn't Sarah Palin know that politicians are supposed to spend every dime they take in and more? Who ever heard of putting money away and forward funding for the future? What an idiot.

The ADN is reporting that in a year where most states are hurting big time, the state of Alaska is finishing out this fiscal year with 2 billion dollars worth of surplus. The state budget is built, for the most part, on oil tax revenues. The current tax platform, ACES, was put into place under Governor Palin. When oil prices were high, she socked a few billion away rather than spend it all. She explained some of her budget philosophy in July of 2008 in this interview with IBD:

Gov. Sean Parnell had a pleasant surprise for legislators in Juneau Feb. 2: A $2.2 billion state budget surplus...That's up $700 million from $1.5 billion estimated as a surplus for the current fiscal year of 2010 that was projected two months ago by the state Department of Revenue.

Parnell proposes to tie up most of the surplus in state savings accounts, a move aimed possibly at preventing the Legislature from spending it, but he would also use $100 million to accelerate a major maintenance program on public buildings around the state, including schools.

Parnell would deposit $1.1 billion of the surplus into a state savings account that is used to "forward fund" education, and deposit $402 million into the constitutional budget reserve...The Legislature tapped the education fund last year when oil revenues sagged, and the deposit this year would bring it back to a $1 billion level.

The state overall has a healthy balance sheet, worth more than $10 billion in various reserve accounts not including the Alaska Permanent Fund with its market value of about $30 billion.

Not bad. Actually, pretty awesome considering the financial state of the country. So much for all that hoopla from lawmakers after the 2008 election that the state might run a deficit and have to dip into the Permanent Fund.

It looks like Palin's successor, Sean Parnell, is following in her footsteps by using the surplus wisely. If Palin had not been tapped for the 2008 election, the lawmakers would more than likely be praising her right now instead of Parnell. The partisanship that threatened to choke the state after she got back was ridiculous. Palin was right to resign and allow Sean to advance the same agenda without the partisan bickering so that the state could move on. But will she get any credit? Don't hold your breath.

People often rake Palin over the coals for not demonstrating a depth of policy knowledge. They complain that she doesn't sit there and wax eloquent about economics and the like. But the most effective things in life are often the simplest. It doesn't take a brain surgeon to understand the concept of not spending more than you're taking in.

I say that the elites who criticize Palin for spouting her common sense "talking points" are guilty of missing the forest for the veins in the tree leaves. They've got their heads so far down into the wiring of the train engine, that they fail to look up and see where the train is going.

Maybe Palin couldn't sit there and spout off a lengthy exposition of how a steam engine works, but she knows how to use it to get where we ought to be. She's a leader. She'll hire engineers to deal with the technical jargon.

In conclusion, enjoy this rant by Glenn Beck about this time last year: