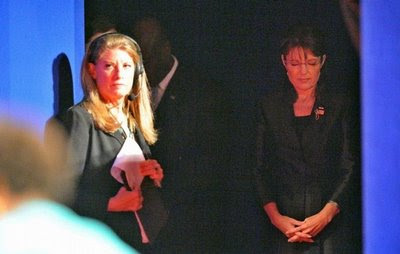 "Politics and morality are inseparable. And as morality's foundation is religion, religion and politics are necessarily related. We need religion as a guide. We need it because we are imperfect, and our government needs the church, because only those humble enough to admit they're sinners can bring to democracy the tolerance it requires in order to survive."

"I believe with all my heart that standing up for America means standing up for the God who has so blessed our land. We need God's help to guide our nation through stormy seas. But we can't expect Him to protect America in a crisis if we just leave Him over on the shelf in our day-to-day living.”

"Our forefathers drew on the wisdom and strength of God when they turned a vast wilderness into a blessed land of plenty called the United States of America. God has truly blessed this country, but we never should fall into the trap that would detract from the universality of God's gift. It is for all mankind. God's love is the hope and the light of the world."

"The Founding Fathers believed that faith in God was the key to our being a good people and America's becoming a great nation."

"Today, prayer is still a powerful force in America, and our faith in God is a mighty source of strength. Our pledge of Allegiance states that we are one nation under God, and our currency bears the motto, 'In God We Trust.' The morality and values such faith implies are deeply embedded in our national character. Our country embraces those principles by design, and we abandon them at our peril. Yet in recent years, well-meaning Americans in the name of freedom have taken freedom away. For the sake of religious tolerance, they've forbidden religious practice in the classrooms. The law of this land has effectively removed prayer from our classrooms. How can we hope to retain our freedom through generations if we fail to teach our young that our liberty springs from an abiding faith in our creator."

"Freedom prospers when religion is vibrant and the rule of law under God is acknowledged."

"Here then is our formula for completing our crusade for freedom. Here is the strength of our civilization and our belief in the rights of humanity. Our faith is in a higher law. Yes, we believe in prayer and its power. And like the Founding Fathers of both our lands, we hold that humanity was meant not to be dishonored by the all-powerful state, but to live in the image and likeness of Him who made us."

"Within the covers of the Bible are all the answers for all the problems men face.”

"We are never defeated unless we give up on God.”

"We Americans are blessed in so many ways. We?re a nation under God, a living and loving God. But Thomas Jefferson warned us, 'I tremble for my country when I reflect that God is just.' We cannot expect Him to protect us in crisis if we turn away from Him in our everyday living. But you know, He told us what to do in II Chronicles. Let us reach out to Him. He said, 'If my people, which are called by my name, shall humble themselves and pray and seek my face and turn from their wicked ways, then will I hear from Heaven and will forgive their sin and will heal their land.'"

"It would seem that not only is religion lacking in the schools -- so is common sense. I wonder what a teacher is supposed to say if a kid asks about those four words on a dime -- 'In God We Trust.' Or maybe that's why they aren't being taught how to read these days."

"The image of George Washington kneeling in prayer in the snow is one of the most famous in American history. He personified a people who knew it was not enough to depend on their own courage and goodness; they must also seek help from God, their Father and Preserver."

"While never willing to bow to a tyrant, our forefathers were always willing to get to their knees before God. When catastrophe threatened, they turned to God for deliverance. When the harvest was bountiful, the first thought was thanksgiving to God. Prayer is today as powerful a force in our nation as it has ever been. We as a nation should never forget this source of strength."
------------

Did you guess, or do you give up?

That's right! It was Ronald Reagan:

That was fun. Let's play again, shall we?

"I believe in one God, Creator of the Universe. That He governs it by His providence. That He ought to be worshipped. That the most acceptable service we render Him is doing good to His other children. That the soul of man is immortal, and will be treated with justice in another life respecting its conduct in this."

"Having experienced the goodness of that Being in conducting me prosperously through a long life, I have no doubt of its continuance in the next, without the smallest conceit of meriting it."

"I’ve lived, Sir, a long time, and the longer I live, the more convincing Proofs I see of this Truth — That God governs in the Affairs of Men. And if a sparrow cannot fall to the ground without his Notice, is it probable that an Empire can rise without his Aid? We have been assured, Sir, in the Sacred Writings, that except the Lord build the House they labor in vain who build it. I firmly believe this, — and I also believe that without his concurring Aid, we shall succeed in this political Building no better than the Builders of Babel."
-------------

Ding, ding, ding! We have a winner! That's right, it was Benjamin Franklin. That last quote was uttered in a call for prayer when the founding fathers couldn't get anything done at the Constitutional Convention. Ben Franklin, as far as we know, was not a Christian. At best, he was a Deist, and that was only later in his life. In his youth and middle age, he was an agnostic.

"It is in an especial manner our duty as a people, with devout reverence and affectionate gratitude, to acknowledge our many and great obligations to Almighty God, and to implore Him to continue and confirm the blessings we experienced. It is impossible to reason without arriving at a Supreme Being. Religion is as necessary to reason, as reason is to religion. The one cannot exist without the other. A reasoning being would lose his reason, in attempting to account for the great phenomena of nature, had he not a Supreme Being to refer to."

"The propitious smiles of Heaven can never be expected on a nation that disregards the eternal rules of order and right which Heaven itself has ordained.”

"Make me to know what is acceptable in Thy sight, and therein to delight, open the eyes of my understanding, and help me thoroughly to examine myself concerning my knowledge, faith, and repentance, increase my faith, and direct me to the true object, Jesus Christ the Way, the Truth, and the Life, ..."

Bet you didn't get that one. Well, maybe you did. That was George Washington.

And the Left is sweating bullets over Sarah Palin?


Note: Quotes are tricky things, and not all quotes that float around the net as having been said by founding fathers were actually said by them. I tried to post the ones here that are legitimate. Not all of the founding fathers believed the same thing. Some were Unitarians, some were Chrstians, some were Deists, at least one appears to have become an atheist (after which the American public practically banned him from the USA).

Personally, I believe there’s spiritual warfare going on too, so none of the attacks on Sarah’s Christianity, or Christianity in general, surprise me.

P.S.
What kills a skunk is the publicity it gives itself. - Abraham Lincoln.
When I first read this, I instantly thought of Levi.

LOL! That "Levi" quote is priceless.

Born again christians like Palin are extreme zealots who are unbalanced, irrational and often hate-filled. The Bible is not to be taken literal and those that do so are grossly misguided and ignorant of the word of Christ. Does the country really need a person who thinks and believes like noted hate-mongers as Jimmy Swaggart, Lehaye and Jenkins (Left Behind Books), Jim Baker, and Oral Roberts governing?

Your first mistake is lumping us all into the same category. I'm a Christian, and I can't stand most preachers that are on TV Sunday mornings. Swindlers, most of them. Out of the guys you listed off I think Lehaye and Jenkins are the only ones I've ever given the time of day. I read their books and meh. Not impressed.