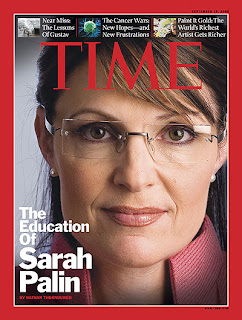 A new article in Time Magazine is impressed with and confounded by Sarah Palin's speedy typing fingers. The implication, of course, is that Palin couldn't possibly have written most of it herself:

With a few weeks to go until the book hits shelves on Nov. 17, the biggest shocker so far is the sheer speed with which she wrote it. The former Alaska governor penned the 400-page tome in just four months, (See my Point #4 below to debunk this falsity) finishing well before the planned spring release date. So how the heck did she do it?

Palin's publisher says the answer is simple: hard work. "When she resigned as governor, she had a lot more time and was able to really devote herself full-time to writing the book," says Tina Andreadis, a spokesperson for HarperCollins. "That's really all that there is."

Well, there's also this: Palin had help. Editorial sidekicks are par for the course in political memoirs, though ghostwriters say many pols are heavily involved in the writing process. Palin's assist came from Lynn Vincent, a writer for the Christian news magazine WORLD, who has also co-authored several other books."

Time goes on to say that they have no idea how much of a hand Lynn Vincent had in writing the book, but the author of the article then goes on to just assume that Vincent pretty much wrote it herself.

I don't deny that Lynn had some hand in the process. She wouldn't have been called in if she wasn't going to play a role. For one thing, Sarah had never written a book before. She didn't know all of the details of the publishing industry and such; someone had to help her out with that. Also, book-writing is a little different than writing an article or a speech; it has its own art. I don't know what role Lynn played exactly, and it's not wrong for Lynn to play a role, but this article implies that Lynn pretty much wrote the entire thing herself. The book was essentially ghostwritten:

Palin, with her colorful family, devoted following and knack for inciting controversy at every turn, is a ghostwriter's dream....It also helps to have a subject who knows what message she wants to get across. Palin was apparently clear from the start about her book's mission: "It will be nice through an unfiltered forum to get to speak truthfully about who we are and what we stand for and what Alaska is all about....."

But having a clear message is no guarantee of speed, especially if it's a policy-heavy, labor-intensive one....Says ghostwriter Bill Harlow. "If it's more personality-driven, I think it's probably easier to finish in a shorter period of time." (Implication: The book is total fluff.)

The last potential time-sink is steeping the ghostwriter in the author's voice well enough that he or she can channel it convincingly. Palin's singular rhetorical style is a boon on that score as well. (Implication: Even if the book sounds like Palin wrote it, she didn't. That's just the ghostwriter sounding like Palin.)

In the end, how quickly the book gets finished depends largely on the ghostwriter's drive to grind it out.... Once the ghostwriter has finished writing, the task of rushing a book into print falls to the publisher. (Here's what the publisher had to say about Palin's involvement in the process.)

So, how did Palin write the book so fast? I have a few theories of my own:
1. She's got a lot to say and a lot of time now to say it.
2. She did graduate with a journalism degree. I think she can type pretty fast when it's warranted. She, in fact, mentioned her degree: The governor said she wants to do a lot of the writing herself, and that it will be her story and her words. "It will be nice to put my journalism degree to work on this and get to tell my story."
3. When the book deal was first announced, a good portion of the content was already written. It is a memoir, after all: Palin said she's kept journals throughout much of her life that she will use for the book. "My journaling really ramped up when I found out that I was pregnant with Trig and then Track was going off to war and I found out Bristol was pregnant," Palin said. "When we had those episodes in our lives come to the surface, it was very therapeutic for me."
4. While the book deal was announced in May, it's obvious that it was going on behind the scenes for months before that. An interview outside of the Governor's mansion in January showed Palin dismissing the $11 million dollar price tag, but not the idea of a book itself. She said that she would tell people when anything became solid (the deal was finalized). So Palin had more time than Time gives her credit for.
5. Palin went dark for many months and basically worked on the book non-stop to crank it out this fast. Good thing too. I get to read it sooner. :-)

We all knew this was coming. We knew that if the book was a success the theme would be that Palin didn't write it herself. And if it was horrible, she of course wrote every word. So very, very predictable. Pathetic, really.

I've seen the "she didn't write it herself" whine already. Truth be known, just about every famous person gets help writing a book. JFK's Profiles in Courage, was written by Ted Sorenson, Hillary Clinton's It Takes a Village, was ghosted as was Bill's My Life. Then there's 0bama's Dreams from my Father, which looks like it was ghosted by Bill Ayers. Unlike JFK, Hillary and Bill Clinton, and 0bama, Sarah Palin acknowledged right from the start that she was going to have help, and 40 people applied for the job. When Lynn Vincent was selected, it was announced publicly. I'd say that ranks right up there for honesty and transparency.