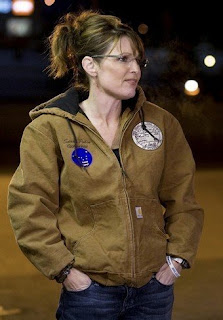 "We're gonna use common sense and abide by our Constitution, and it's all gonna work out."
- Sarah Palin 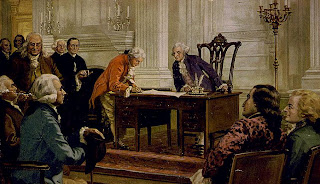 A Glenn Beck listener sent a letter to his program that pretty much sums up the way alot of Americans are feeling. Check it out here.

It's been said that Sarah Palin is the candidate of the tea parties.

What are the tea parties about? At their core, three things:

1. Quite spending money you don't have and stealing from our children.

2. Try listening to We the People once in a while.

3. Is it too much to ask that you abide by our Constitution? (and by the way, if you continue to ignore us, we'll vote you out so fast you won't know what hit you.)

Now, I liked Sarah Palin in the beginning. I had a good impression of her already because I was impressed with how she handled the birth of Trig back in April.

When she was announced as VP, I was ecstatic.

As the campaign went along, I knew that she had it in her, but that she needed to manhandle the media more. In other words, she needed to quit giving her interviewers (like the principal and the the elf - Gibson and Couric) the benefit of the doubt and control the interview herself.

I think she has since mastered that quality. (If you want proof just check out her recent interviews with Matt Lauer and Wolf Blitzer. And then, she took Letterman on and actually beat him at his own game. The Cuda is making progress.)

I found myself in the position of halfway believing the media's perception of her, but I wasn't sure. I had a gut feeling that there was more to the story, so I did some research of my own. As a result I think I know more about Alaska than I do about my own state.

I decided to disregard the campaign and focus on interviews and explanations for decisions she made before she started running. After all, who you are before you run is who you actually are, and that is who you will be when the campaign is over.

I did my research, and I liked what I found.

Unlike some politicians where the more you dig, the more disenchanted you become, the more I dug up on Sarah Palin, the more it confirmed my initial reaction that here was a gold mine.

Her style is great, but it's backed up by real substance. Good substance.

I listened to her Pittsburgh Tribune interview where she laid out her conservative and pragmatic ideals. I heard a woman who thought of herself as accountable to the people and looked to her state constitution for guidance on all her decision-making.

I found her IBD interview and her press conference with then-Senator Ted Stevens where she showed her expertise and pragmatic approach to energy issues.

I found countless other interviews and speeches where, more than anything, I discovered a woman whose supposed bane of never being accepted by the establishment was actually a huge blessing.

Since she has no elite supporters with big money behind her, she is one politician who is truly free. Free of strings and special interests, free to actually represent the people, free to (imagine this) govern by common sense.

I cannot tell you what a relief it has been to find a political leader who actually governs by her brain and the laws of the land, and not by the wishes of her political donors.

That's why most of what Washington does defies logic. They're not working on the side of we the people, they're working for their donors. I think it's time we cut off the money supply.

After the big partnership was announced between Exxon and TransCanada, Sarah went on a local talk radio show in Alaska. Her philosophy of government is so awesome, it's so simple it's stupid, but it works! It is what America needs.

Listen to both parts here.

Don't you love it? Common sense Conservatism. "We're going to use common sense and abide by our Constitution and it's all gonna work out."

I have to work the night of the fourth of July, but I'm still going to try and find a tea party or a protest somewhere, and I'm going to be there.

"Do not go gentle into that good night. Rage, rage against the dying of the light!"

"If You Have HBO Drop It, and Tell Them Why"

The troll known to the world as Bill Maher sunk to a new low the other day, talking about the Palin/Letterman controversy:

"In defending his friend, Maher thought Republicans had over reacted and this was just a case of ‘fake’ outrage. Much ado about nothing. He then went on talking about how Letterman had invited Sarah Palin and her young daughter, Willow, to appear as guests on his show but the Governor declined because she thought it would be wise to keep her daughter away from him.

"Said Maher, “…that’s right, he’s 62 years old, he’s gonna [f**k] her right there on stage…it would be very wise to keep her, very wise, yes. You know, I’d worry a little more about the 18-year old hockey players who knock up your daughters.”

"To which his audience of trained seals laughed and clapped and had a good old time."

If you really like your HBO, (sigh) hey, as our "fearless leader" keeps telling us, we all gotta make sacrifices.

Letterman apologized (kinda), and I was willing to halfway let him off the hook. But this is beyond low.

And maybe someday a full-grown Tripp will have a word or two to share with you. Think about that the next time you open your dirty mouth.

Sexist Pig.
Here's the link to the feedback page of Maher's show. Please tell him and HBO exactly how you feel and what you intend to do about it.
1 comment:

Make Her A Star 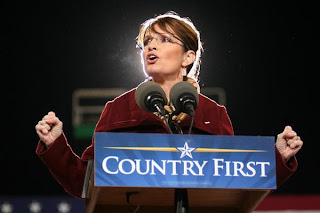 Here's some excerpts from an awesome article written by Dan Calabrese:

"So, Republicans, you’re looking for people who can serve as faces of a party on the upswing. What qualities would we want to see in such people?

1. They’ve served in public office and have actually governed effectively.

2. Rather than just talking about fiscal responsibility, they’ve made it happen under their watch.

3. When possible, they’ve made sure the private sector would take the lead in crucial initiatives.

4. They’ve taken on corrupt, entrenched interests to make government more responsive to the people it serves, even when those interests were fellow Republicans.

5. They pull no punches in criticizing Democrats, but they do so with a positive outlook and a pleasant demeanor.

6. They’re not intimidated by the inevitable crap they will catch from the media, celebrities and whomever else.

7. They have an enthusiastic following upon which to build.

8. Finally, if you’ve got all of the above, it can’t hurt if you also look fantastic....

"Guess what. There’s one person who possesses all eight:

"Palin knows her stuff, backs it up with action and expresses herself with the perfect mix of substance and agreeable style.

"I am not writing this column to tout Palin as a presidential candidate. Unlike most who write about her, I do not view everything she does through the prism of presidential aspirations she may or may not have. This column is about the importance of prominent Republicans who are serious about good governance and can serve as the face of a party that represents such ideals.

"Republicans should embrace everyone they can find whose track record in public office – and in the public eye – demonstrates the best of Republican governance. And no one fits the bill better than Palin....

"Certain Republicans fear Palin’s prominence because their image of her is based on Tina Fey routines and background turkey slaughters....

"If you read substance-challenged media like Politico, you think it’s all about unnamed GOP operatives grumbling about the way her scheduler works, or GOP senators (who refuse to put their names on the record) finding her annoying.

"Have you ever listened to Palin talk about policy? Have you examined her record in Alaska? Do you know the political courage she has demonstrated achieving crucial goals there?....

"Unlike their Washington counterparts, there are Republicans around the country who have done well in state and local positions, and they deserve to be the party’s new stars....

"But start with Sarah Palin. It’s about her record, her vision, her message and her sincere appeal. They are all top-notch, if you don’t realize that, it’s because you’ve been focused on nonsense instead of what really matters.

"Make her the nominee for president? I don’t really care, and I’m not sure she cares as much as you think she does. But by all means, make her a star, because the Republican Party doesn’t have anyone who comes even close to fitting the bill like she does."

Hat tip to Dan. He pretty much said it all.

Go check out the whole article here.
No comments: