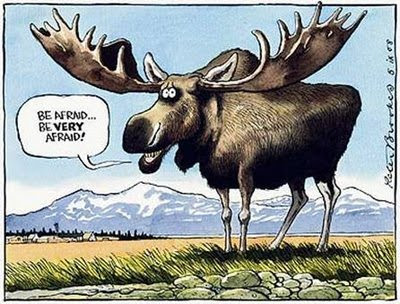 The recent hubbub over Palin stumping for McCain has got me thinking about a problem that we knew existed among Palin's detractors, but now it's clear that it exists among her supporters as well: projection. People on both sides of the Palin aisle are guilty of seeing in the woman exactly and only what they want to see.

Anyone with a pair of eyes or ears over the last two years knows that Palin loves John McCain, that she holds no personal animosity towards John McCain, that she would never say anything bad about John McCain, and (in the aftermath of "Visorgate") she supports John McCain's reelection. She has said all of these things all along. When Palin's supporters were ready to hang McCain for not committing wholeheartedly after the election to support her if she ran in 2012, Sarah Palin came out and defended John McCain.

Do I want Palin to stump for the man? No. Do I wish she would just donate to his campaign and leave it at that, or not donate at all? Yes. Am I shocked and dismayed and disappointed and ready to drop Sarah Palin because of this? Absolutely not! I knew all along that this is where she stands. I may disagree with it, but I was never under the illusion that she was going to do anything else. So why is the conservative blogosphere buzzing about this?

It's a classic case of projection. We're all guilty of it. I'm guilty of it. While Palin's detractors view her as a wolf-killing Godzilla that's going to force them all to become Pentecostals, her supporters tend to see her as Reagan reincarnated and that she's going to storm into Washington with the carcass of a dead grizzly strapped to her back and a bazooka over her shoulder as she single-handedly slays any and all who are not purebred conservatives. The Glenn Beck/Tammy Bruce projection of Palin.

Sarah Palin has never once said that she is running for President. Whether you agree with it or not, Sarah Palin has been consistent in her support of John McCain. So if any of you have sour grapes about any of this, you have no one to blame but yourself. You've created a Palin in your mind that never actually existed.

When C4P first got started, there was a mission statement drawn up. One of the things in that statement was that we are not blind followers of Palin who actually have no idea of what she stands for. The opposite is true. We have researched her. We know exactly what her record is, how she works, and what she stands for, and that's why we support her.

What is the reality of Sarah Palin? Did she clean house in Alaksa? Yes. But she also worked with everyone, Democrats, Independents, and Republicans. Is she a conservative? Yes. But she has no problem working with those who are not. She is not an ideologue. She is a pragmatist. How on earth do you think she had such a high approval rating in Alaska? Do you think it's because everyone in Alaska is uber-conservative?

I find it very revealing that the McCain aides said that they didn't look at Palin to play to the conservative base, although that was the assumption. They actually chose her because of her ability to appeal to Independents. If you look at her record you will see that.

Perhaps this comes as a disappointment to some who have envisioned Sarah as their conservative or libertarian Messiah. Ladies and gentlemen, she is not "The One." She never claimed to be. There is no "One." There is us. All of us working together to try and salvage something of freedom and hope and opportunity and liberty in this country for the next generation.

Let's get an accurate description of Sarah Palin from Uncle Ted:

P.S. I love this blurb in Mark Steyn's article on President Obama:

The most striking aspect of his performance was how unhappy he looked, as if he doesn’t enjoy the job. You can understand why. He ran as something he’s not, and never has been: a post-partisan, centrist, transformative healer.

That’d be a difficult trick to pull off even for somebody with any prior executive experience, someone who’d actually run something, like a state, or even a town, or even a commercial fishing operation, like that poor chillbilly boob Sarah Palin.

At one point late in the 2008 campaign, when someone suggested that if Governor Palin was “unqualified” then surely he was too, Obama pointed out as evidence to the contrary his ability to run such an effective campaign. In other words, running for president was his main qualification for being president.

The irony? Palin actually has a record of working across party lines and of being able to bring people of all different ideologies together to accomplish a goal that moves things forward. Palin has the record to match Obama's rhetoric (minus the stupid stuff like rolling back the seas and the healing of the planet, of course).

What? You mean Obama is not actually going to roll back the seas and the heal the planet? There are going to be some mighty disappointed people out there...No.. wait! They wouldn't be the voters in Massachusetts, would they?
O/T Did you know our PM stalks your President? A tad creepy don't you think?

LOL! That article is hilarious. Like shadowing the cool kid hoping to get invited into the clique. Life doesn't get very far beyond high school.