The Meaning of Sarah Palin Day 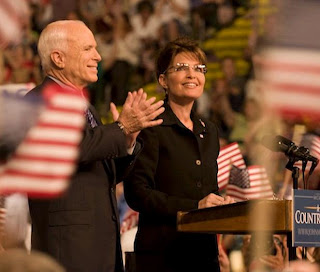 A war has been waged underground and internally for decades now. A war between those of us who believe what our founding fathers believed, and those who would hijack our Constitution and shape a new country after their own image. It was a fight mostly invisible to the multitudes in the middle, and we were getting tired.

A middle-aged hockey mom from a small town in Alaska may not normally have created such an uproar, but for conservative, libertarian, and traditional Americans in 2008 it was just the breath of fresh air that we desperately needed. She reinvigorated us. She reminded us of who we are and why we must keep going. When she speaks we get tears in our eyes. Not because of her, but because through her we can see something else.

Some may see the buzz in conservatives circles on this day as hero worship. I assure you, it is not. Sarah Palin is important to us not so much because of who she is, but because she reminds us of who we are. She is the first truly traditional American on the national political scene since Ronald Reagan. That is what we have responded to.

Why do we celebrate Sarah Palin Day? Because she represents the one light left burning in a quickly darkening world. She is our Lady Liberty. At a time when the whole world is sinking toward dependence and slavery, we've still got one person out there who speaks for us, who embodies our desire to be independent and free. For every action, there is an equal and opposite reaction. When extreme evil arises, it's counterpart will also emerge, sometimes from the most unlikely of places.
I'm a big believer in Providence. Why did Alaska stay off of our national radar for so long, thus allowing the state to stay closer to the ideals of America's founding than the rest of us? Why was Sarah Palin rejected by the establishment at every turn, thus leading her to rely on things other than money and influence which would have smothered her with the system? Why did Track Palin pick hockey over basketball as a freshman in high school, thus leading him to discourage his mom from running for the Senate?

Why did everything seem to happen to the Palins in the months leading up to August of '08, as if to put the family through a time of testing and preparation? Why did we have an energy crisis leading up to the 2008 election that brought a new focus on "the Forgotten State," ANWR, and a brand-new, reform-driven governor? There are dozens of other "whys."

I believe in free will and choice, but I also believe that God can use even the evil of this world for His purpose. All things may not be good, but all things will work together for good. Nothing is left to chance.

It's evident from history that no great historical moment or turning point happens out of thin air. The roots are deep and the seeds were sown long ago. For Sarah, those seeds were growing up during the time of Reagan, living in Alaska with parents who challenged her in matters of faith and discipline, and a love for sports, competition, and service that drove her to choose a political path. For America, the roots go back even further.

We cannot force the hand of history (His story). God will write it in his own good time. Our biggest problem is impatience. We're not driving this boat; we're merely scrubbing the deck. The Captain will steer the ship.

The American Revolution did not begin in 1776, that was merely the moment that all of the separate lines of history came together. One by one the seeds were sown then, as they are sown and grown now. Just like every little event that led up to that gymnasium in Dayton, Ohio one year ago.

Every one of us make choices in our lives. Whether we choose the right thing, even a small thing, may not seem like a big deal today, but that's because we have no appreciation for what God can do with our future. I'll bet it wasn't always easy for Sarah to make the right decisions in her life, or to admit when she made the wrong ones and work to change. But I'll also bet that now she's glad she did.

These are the lessons of August 29th:

1. Never lose faith; God's next miracle may be just around the corner.

2. Do the right thing, even when you think no one is watching.

3. There's a reason for everything, even when you can't see what it is.

4. Root your life in faith and family and no wind can blow you down.

5. We all play a role; do your part faithfully come what may.