The Nineteen-Year-Old Punk from Hades 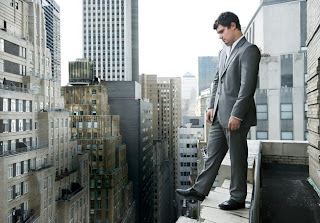 I'm talking of course of the "Young Man" (as his manager calls him), He-Who-Shall-Not-Be-Named, Levi Johnston. His Vanity Fair article is now online. Check it out, if you've got a strong stomach.

Okay, I'm going to shock you. I actually think that a lot of what he said is probably the truth.

The question is, what kind of perspective does a (then) eighteen-year-old lend to the discussion? Oh, I don't know, maybe that of an eighteen-year-old? What was really telling for me was when he would say things like, "I never saw...." this and that happen. Like, " In all the time Bristol and I were together, I’ve never seen them sleep in the same bedroom." Well, I hope not! That would've been a little awkward....

He whines about having to cut his hair for the convention. Boo-hoo. I'm sorry your mullet had to be sacrificed for the candidacy of Vice-President of the United States. Sorry it interfered with your hunting plans. He says the convention was boring. Again, my heart bleeds for you. How horrible that you be bored. Perhaps we should stop the whole world and accommodate everything to your liking. You strike me as a spoiled brat. Sorry we couldn't design the Presidential race just so that you could be comfortable. It's life, buddy. Suck it up. And quit the victim theme. As if you're the only guy connected to a campaign who's ever suffered. Maybe you shouldn't have gotten the Governor's daughter pregnant.

I like that he took a swipe at Meghan McCain though. That was funny.

Some things are gross misinterpretations targeted toward boning up the stupid rumors that started during the campaign. Other things I just simply don't believe period. My favorite part was his account of telling the parents that Bristol was pregnant: "Sarah said she was going to get Todd, who walked in looking like he was going to rip my head off. I was ready for an ass whooping." Good for Todd.

Honestly, the article is an embarrassment on many levels. It's embarrassing that the media is willing to lock step with the perspective of a teenage punk. It's embarrassing for Levi, who is basically sticking a knife in the back of his family. It's a story from a spoiled teenager's perspective. Even if you took everything in the article as Gospel truth, you would be left with one conclusion: "What? The Palins are a typical American family? Shock!"

I was disgusted in reading the story what Levi said in the Vanity Fair article about the Palins.

A thought came to my mind that perhaps this was really Levi's own family he is talking about but he put Sarah's name, etc in place of his own family.
His parents are separated. I am not sure if they are divorced.

Levi needs a mature male mentor to come into his life real soon to help Levi get on the right path and see the errors of his ways and to get away from people who are giving him wrong influence.

Tripp needs a dad who will be responsible for his actions.

I know that his Dad left this past year, but not sure if they're officially divorced. I just hope he grows up and gets himself straightened out.