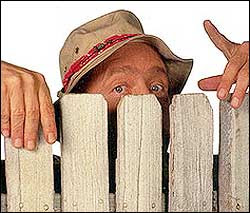 So, Joe McGinnis feels the need to clarify to David Weigel why he moved in next door to Sarah Palin.

Uh, dude? We know why. You're writing a book and you thought the best way to come across as a serious, responsible journalist was to go paparazzi on the family. That's why. Honestly, how did you think the Palins were going to take it? The person who has written hit pieces on her administration and who has dined with Trig-Truthers moves in next door to write a book about her, and you what, thought they were going to throw a welcome-to-the-neighborhood party?

However, Palin was not implying that he was a pedophile. Some have taken it that way, but that's not the way I saw it at all.

From her Facebook post, I took away the obvious point of, "What fascinating things will Joe uncover by being next door and observing the mundane things in our lives? What great discoveries lie in my garden, or in the swimming hole, or in Piper's bedroom? Oh, look they're mowing the lawn! Fascinating."

Others, like Glenn Beck took it a tad more seriously, but I'm glad that Joe has cleared up that he has no interest in being a Peeping Joe. (Yes, I called my previous post on Joe that, but just because I thought it was a funny play on words. Just like, Joe "Wilson.")

Joe contends that he has no interest in butting in. So why is he there? If he has no intention of gleaning tidbits from the Palin's personal lives, why be next door? He could do the job he's doing without bugging them just as well, if not better, in town.

The second part of the so-called pedophile smear was Palin's interview with Glenn Beck, in the which she told Joe that he better leave her kids alone. Now, I am the simplest of beings, but to me that means, "Leave my kids alone." As in, leave them alone. Don't talk to them, don't bother them, don't try to pump them for information, etc... There's a reason Palin feels this way. Piper was once ambushed outside of her school by reporters. This investigative author is living right next door. She doesn't want friendly neighbor Joe "Wilson" sticking his eyes up over the fence and asking her how her day at school was. And oh, by the way, do mommy and daddy fight?

Glenn did call Joe a voyeur. But Glenn, bless his heart, is protective of Sarah. He's a friend of hers. And certainly Joe had to realize how his being next door would appear. Again, if he wasn't interested in gleaning personal tidbits, then why would he be next door? Why?

"But the neighbor called and offered it to me. What would you do?"

What would I do?

First off, a simple Google search will reveal many homes for rent in Wasilla, so Joe must have been incompetent if he couldn’t find one. And the apartments I found online are cheaper than what Joe is paying.

Secondly, I might have given the Palins a heads-up beforehand, seeing as how I could imagine their reaction to the person who has written hit pieces on them in the past and who has spent time with Trig-Truthers now moving in next door as I write a book about them.

Not to mention the fact that Palin's home is the one place in the world she thought she could retreat to and get away from all of this garbage. Now it's going to be twelve feet away from her constantly.

I might call and say, “Hey, I got an offer for this house. I just wanted you to know that I’m just going to be working on my book. I’m not going to be spying on your family or anything, I will leave you alone and completely respect your privacy, this is just the best offer I could get.”

What Joe did was just simply in bad taste. Now he's just trying to cover his tail.

I feel that I should also point out the obvious hilarity that Joe is so very concerned that he's being smeared. Uh, Joe? You've been smearing people for years, including, most recently, Sarah Palin. You're just finally getting a taste of your own medicine. Don't like it? Quit doling it out to other people.

As for other things Joe told Weigel, let me get this straight: Joe says he bid on the dinner with Palin because he was bored? He thought a responsible journalist (oh, that's funny) should win the dinner, but he knew he couldn't pay the price of the dinner anyway?

Joe says he's got a whole new angle now. Well, I'm sure he does. He just wants to sell his work. This kind of thing just gives him more material and more publicity. So be it. Just another guy making a buck off of Sarah Palin. Given that he's already written hilariously twisted pieces on Palin and that the man has already dined with Trig-Truthers (yes, I am going to keep repeating that), I can say with a pretty good degree of certainty that the book was a smear piece anyway. If it's even more of a smear piece now, whatever.

"She should have been gracious."

Why? Palin has tried that numerous times before with reporters, etc... in an attempt to break them out of their Palin Derangement Syndrome. It hasn't worked. They go right out and write another hit piece on her. Why should she cast her pearls before swine? They just turn again and rend her.

As for the "hatred she inspires," um, anybody remember the 2008 election? Anybody remember the attacks on her kids and the ridiculous smears on Sarah Palin that were, if not just left uncorrected, actively promoted by the media? This wasn't seen in coverage of Palin before August 29th of 2008, so why did they do this?

Because Sarah Palin was a threat to Obama. They liked Obama. This woman threatened his status. Therefore, they abandoned nearly every last shred of journalistic integrity to bring her down. To this day lefties of all stripes misreport and flat-out lie about the Governor because they like Obama and they see her as a threat to him.

So how come nobody ever talks about the hatred that Barack Obama inspires?

My advice to Palin if she is asked about this is to just say, "Well, I'm glad he clarified. Sounds like we're on the same page with him agreeing to respect our privacy. The fence is up now. Good fences make good neighbors, so, we're good."

1. Palin could write a 500 page book on policy and nobody would touch it. She writes about her new neighbor, and the media sends reporters up to get pictures of her fence. Priorities, priorities.

2. Palin has moved on already. The fence is up, she's good. The rest is Joe whining.

You have a good sense of humor- it’s how I get through life and recently how I deal with politics in general. I wonder if SNL will do something it, but maybe not because it might make her look good.

This exemplifies the LSM’s obsession with her, and to diminish her. It also shows their lack of effectiveness in doing so, which is actually funny to me in and of itself.

Thanks, Bill. Good to see you around here and on C4P.