Down With the GOP 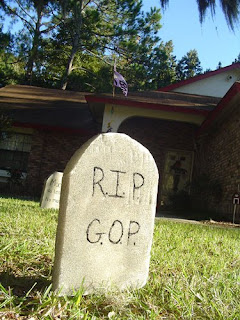 This is why the Republican Party will die. Unless we get rid of the GOP establishment that eats us instead of eating the enemy, the party is over. Will a new party take it's place? I don't know. Maybe we'll go to a post-party system where votes are cast based on values and principles and ideas rather than on who the party heads tell us we can vote for. All I know is that I've had enough of this garbage:

GOP Campaign Calls Upon Conservative Hoffman To Drop Out, In Wake Of Poll With Him Up :

In a press release sent out by the Dede Scozzafava campaign, the moderate Republican running in the three-way special election, several GOP state legislators call upon Conservative Party candidate Doug Hoffman to drop out of the race -- and declare that a new poll from the pro-Hoffman Club For Growth showing him ahead is false:
"Doug Hoffman must do the right thing and drop out of this race right now," said Assemblywoman Janet Duprey. "This is a campaign for Congress -- not an audition to be a talking head on a cable news program. Doug Hoffman doesn't live here, he doesn't understand our local issues and, regardless of his campaign's theatrics and false polls, he knows he is completely unelectable.
Make no mistake about it -- Doug Hoffman is a spoiler, and by staying in this race he will jeopardize a seat the Republican Party has held here since the Civil War. It's high time that Hoffman puts the good of this community over his personal ambition and endorses our Republican nominee Dede Scozzafava," she concluded.
Hoffman spokesman Rob Ryan gives us this comment: "This just proves many Republicans don't know how to read polls or sense the groundswell of support that's taking place in the district. Dede Scozzafava is the spoiler in this race, because she's so liberal. Doug Hoffman will be the next Congressman, because Republicans from throughout the district will vote for him on election day."
-----
Enough. Enough, enough, ENOUGH! No more! No more of party hacks telling us, the voters, We the People, who are supposed to decide who we want to represent us, telling us who we should and shouldn't be able to vote for. A pox on both your houses!

Email ThisBlogThis!Share to TwitterShare to FacebookShare to Pinterest
Labels: GOP